Denver, CO –  Playoff basketball has one simple premise: survive and advanced. The Warriors did just that Wednesday night at the Montbello campus, as they defeated the visiting Mullen Mustangs 56-46 in the first round of the 5A state tournament. The Warriors had to overcome a  Mustang team that looked to limit the Warriors possessions by eating up chunks of time with their own offensive possessions and their own mistakes. The Warriors committed a number of unforced turnovers in the game that allowed the Mustangs to hang around behind the hot hand of junior wingman Nathan Davis.

Mullen set the tone for the game with the first possession eating up 1:15 with out even attempting to attack the Warriors 3-2.  The Mustangs elected to swing the ball from side to the other near the volleyball line while the Warriors did not extend their defense past the three point line. If it wasn’t for a traveling call the Mustangs would have eaten even more of the clock up before attempting a shot. The Mustangs did get on the board first with a three pointer from Davis but failed to score again in the quarter. The Warriors simply let the turnovers comes to them to create their offense. Senior Kur Ayol scored five points in the quarter to lead the Warriors to a 9-3.

The second quarter was almost the undoing of the Warriors. The Warriors failed to get much going on the offensive end of the floor by committing turnover after turnover or failing to get offensive rebounds. The Mustangs took full advantage starting with a three pointer by Matteo Busnardo that jumped started Mullen. Davis then went to work against the Warrior zone scoring 10 points in the quarter. The Mustangs end the quarter on a 10-2 run and took a 20-19 lead into halftime.

It looked like the Mustangs were mounting one last charge the Warriors caught the turnover bug and Busnardo hit back to three pointers combined with a Davis layup to cut the Warrior lead to 38-34 with 6:52 left in the game. The Warriors Awol shot the lane for a steal and converted it into a lay up and a foul to calm the Mustang charge. With 3:00 left in the game the Mustangs began to foul as the Warriors was happy to pass the ball around eating up the clock. But as Warriors missed free throws they also got the offensive rebounds and continued to eat up clock. Despite Davis scoring 10 more points in the quarter, the Warriors kept making free throws to getting the offensive rebounds not letting Mullen cut into the lead. The play that sealed the win came with 1:14 left in the game. The Warriors stole the ball and made a long outlet pass to Bonds the Mullen defender was called for an intentional foul as Bond went in for the layup which he made. The referee awarded Bonds the made basket and free throw, then gave Bonds another free throw for the intentional and then gave the ball to the Warriors out of bounds underneath the basket. Which took the score from 50-40 to 54-40. The Warriors was then fouled on the subsequent play and Sekou Cisse made both free throws to push the lead to 56-40. Mullen scrambled in the final mite to score six points to make the final score 56-46.

The Warriors travel to Fort Collins High School on Saturday to take on the Lambkins in the second round of the 5A Tournament.

Holy Family Advances to 4A Sweet 16 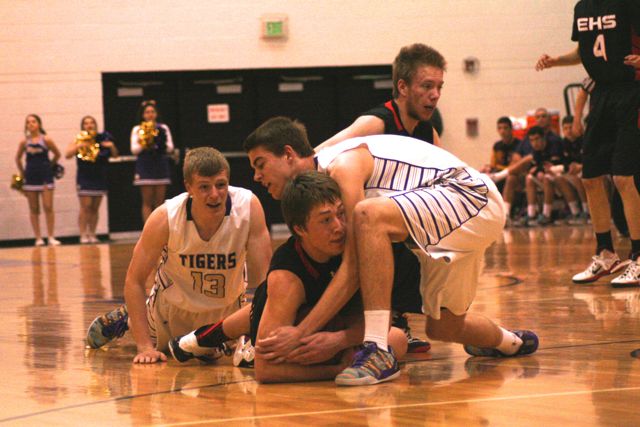