Aurora, CO – The Regis Jesuit Raiders created a three-way mess at the top of the Continental League by defeating the Legend Titans 52-51 Thursday night at Guy Gibbs Gym. Regis maintained a lead through most of the game but were unable to pull away because of the Titan’s three-point shooting. Regis clung to a lead late and Legend had a chance to tie it at the free-throw line but missed, Regis had a chance to ice it at the line as well but missed seating up the final play that would leave the gym stunned.

In the first quarter, the Raiders got big first-quarter form junior point guard Alonzo Paul. The crafty guard scored eight of the Raiders 14 points the quarter. Legend remained undeterred from the three-point line in the first quarter. Letting them fly, making five three’s in the quarter with juniors Sean Evans and Ryan Burnett making two each. Charlie Hollenbuagh gave Legend its last lead of the game with a three-pointer just before the quarter buzzer.

In the second quarter the Titans continued to hoist up the three’s however only one found it’s mark. It would also be the only field goal of the quarter for the Titans as well. Junior Tanner Lamb accounted for all five points that Legend scored. The Titans basically didn’t look to score inside the three point line in half court sets and they didn’t get any fast break opportunities. It was better for the Raiders in the second quarter but not tremendously. Blakley Stoughton was able to get to the basket a couple of times as did senior Will Barbara. Regis took a 26-20 lead into halftime with all the momentum as well.

The scoring flood gates opened up for both teams in the third quarter. Regis got started by spreading the ball around with five different Raiders scoring in the quarter. All five scorers tallied at least three points and Ty Bergman led the Raiders with five points in the quarter including nailing coroner three that cooled a Legend run. Meanwhile Legend started to climb back in the game by eschewing the three pointer and started getting the ball to junior wing Garrett Siebert who did his best work attacking the rim and posting up. the 6’6 wing scored eight points in the quarter. But the Titans didn’t totally abandon the three. Senior Cam Le Van hit a three that cut the Raiders lead to three and then Lamb hit another three at the quarter horn to tie the game at 44.

The fourth quarter felt much like the second quarter with both teams struggling from the field and limited to one and done offensive possessions. And yes there was the “patience” ball being played at times by both teams running a minute plus off the clock on some possessions. Paul was able to get a three-pointer to drop for Regis and Bergman was able to finish an old-fashion three-point play late. Legend though started with Siebert hitting a shot in the paint and Lamb connecting from three-point land that cut the Raiders lead two points. The Titans only shot four free throws in the fourth quarter and made two of them. The last two misses would be costly one of which would have tied the game with less than a minute to go/

Legend was forced to foul after cutting the lead to 52-51. Regis missed the one and one and the Titans controlled the for the next 38 seconds. After a time out with 7 seconds left the Titians ran a play for Lamb who was able to the get the shot off and see it wish through the next 1.5 seconds before the buzzer was to sound. However a foul was called for an illegals screen and and the shot waved off giving the Raiders the 52-51 victory.

Legend fall into a three way tie for the Continental League championship with games against Mountain Vista and ThunderRidge coming up. 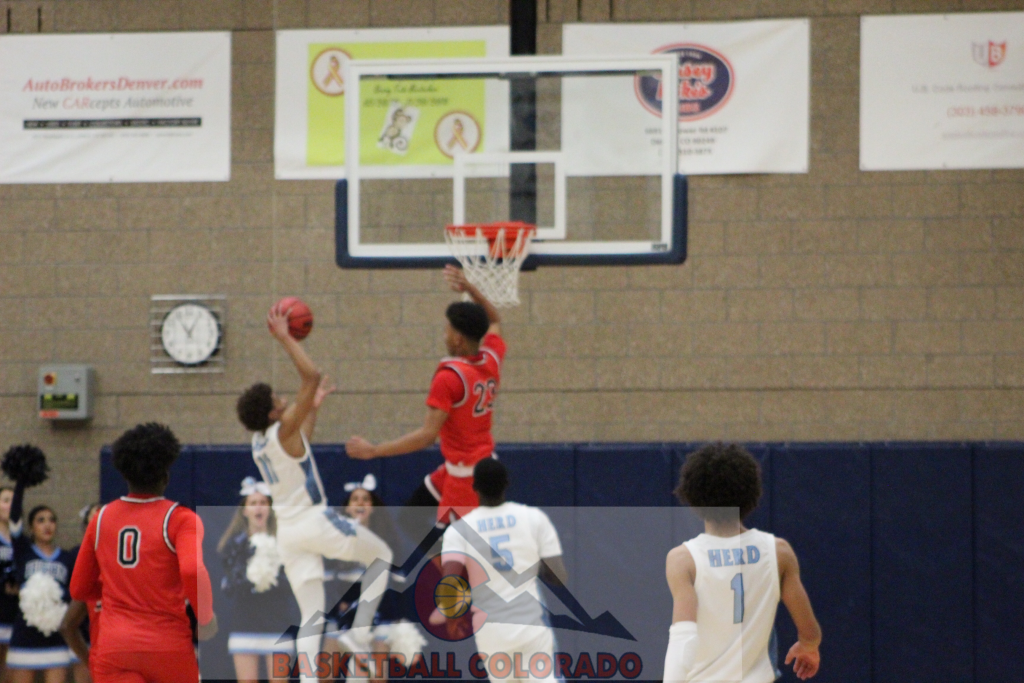