Fruita, CO – The Fruita Monument Wildcats came into the game vs. Grand Junction still looking for their identity on the hardwood. The Wildcats beat Montrose in over time earlier in the week. That win gave them extra motivation to take on the Grand Junction Tigers in the first cross-town rivalry of the season. On paper the Tigers sitting at 11-6, 3-1, taking on the Wildcats 2-13, 1-1 looked to be a landslide of a game. Throughout this cross-town rivalry, no matter how bad one team was and the other good, they have always played each other tough.

The first quarter began as the paper suggested seeing the Tigers jump out to a commanding 10-2 lead. Making it seem to the Wildcats that it would be a long night on the court. However, the Wildcats had their weapon in Dylan Row surging with confidence. Row put up 18 points in the previous game including 13 free throws and the free throws to tie the game at the end of regulation. Just as free throws became a crucial part in the Montrose game, they were the one point that kept the Wildcats in the first quarter against the Tigers. Row hit three of four from the charity stripe, getting five of his 21 points in the quarter. While the Tigers offense got rolling early the Wildcats weathered the storm, getting the Tigers into foul trouble quickly. Grand Junction’s D.J. Wells got two quick fouls in the first quarter, quickly after picking up his second came his third. Following Wells third foul midway through the first quarter saw Wells sitting on the bench for the remainder of the half.

While the second quarter started, Fruita down 13-7, the Tigers turning the ball over and committing several fouls played right into the Wildcats play style. The Tigers without their top big-man on the floor, one of their other three top players needed to step up. That would be by way of Ben Volkmann getting 12 of his 17 points in the second quarter, going eight for eight at the free throw keeping their lead alive. The Wildcats slowing the game down by forcing the Tigers to shoot free throws allowing them to set up their press chaotic defense. The Tigers moved the ball with ease through the middle of the press defense getting their quick passing offense going. The quick moving offense forced the Wildcats to commit silly fouls sending the Tigers to the line, in the bonus, for the rest of the half. Row, 5/6 from free throw line in the first half, for Fruita hit his 12th and 13th points from the free throw to close out the half Fruita still down 33-24 to Grand Junction.

The third quarter started off seeing D.J. Wells catch the ball in the far corner then throw up a shot fake, getting the defender to jump, he then blew past him for a quick two. The Tigers having their five starters back out on the floor for the second half started to feel the pressure of the game breathing down their neck as the Wildcats were still within striking distance. The Wildcats not going away quietly forced Ben Volkmann to commit his 3rd foul of the game, now two Tigers in foul trouble. Dylan Row, scoring most of the teams points, needed a teammate to help out in the scoring department. However, no major scoring came to help Row, his teammates did help in the defensive department. Following the Tigers Volkmann picking up his third foul, the Wildcats defense stole the ball seeing Row get the open layup. Row willing his team back within 11 following the tough defense then the easy layup. Grand Junction’s three key players, Wells, Volkmann, and Ridge Droskin, playing in foul trouble played smartly without fouling again. Towards the end of the third quarter the Wildcats got the 4th key Tiger in foul trouble seeing Tyson Zanski pick up his 3rd at the end of the third quarter. The Tigers having four players in foul trouble pushed the lead to 45-30 on top of the Wildcats.

The fourth quarter started off hot for the Wildcats as Cade Richardson checked into the game. Richardson helped out on the scoring nailing down 10 points, all in the 4th quarter. Richardson’s hot scoring gave the Fruita fans and teammates a shot of adrenaline/ excitement. Following Richardson’s scoring Dylan Row then stepped up splashing a three ball down getting the Wildcats back to within seven. Unfortunately, the scoring by Richardson came a little too late in the game. The Tigers got into the bonus and began the free throw game, all the Tigers had to do to keep the lead knock down their free throws. As a team the Tigers shot 10 of 12 free throws, making the “easy” ones in the clutch to seal the nine-point victory, 59-50 over Fruita Monument.

Dylan Row finished with 21 points for the game lead and team lead. Cade Richardson added 10 points for the Wildcats. Grand Junction ended the game seeing a balanced scoring attack Ben Volkmann finished with 17 points, Ridge Droskin with 15 points, Stockton Rock with 10 points, and D.J. Wells with nine points. Grand Junction improves to 11-6, 3-1 in the SWL. Fruita Monument falls to 2-13, 1-1 in the SWL.

Sat Jan 31 , 2015
From our friends at ColoradoPreps.com Colorado Academy at Faith Christian […] 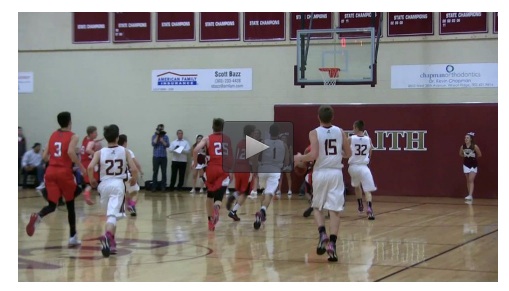