Aurora, CO – 176 days. That is how many days had passed since Nick Holmes, a senior on the Overland High School Boy’s Basketball team, received the news he lost his senior season to what doctors believed at the time was Osteosarcoma and when he signed his Letter of Intent to accept a full basketball scholarship to Eastern Wyoming College.

When the news spread Nick was fighting a cancerous tumor; the outpouring of support was incredible. In the early days, support of all forms came from all over from the community: their church, the student body, the alumni, and other high schools like Sand Creek in Colorado Springs.  “It was huge,” said Coach Danny Fisher of  the support Nick and his family received. “Everybody who found out on time, who found out later on, everybody and anybody wanted to do anything they could (to support Nick).”

The Holmes family had already faced a serious crisis before when Nick’s mother Nicole had her own health crisis. She knew what her only child was about to face. “When the first diagnosis came in, it hit her really hard,” said Nick’s father Julian.  It wasn’t easy for Julian either after supporting  his wife through her sickness and the side effects of treatment; now, he would have to do it again for his son.

Day 45, a glimmer of hope but a certain amount of trepidation. There was a chance that it wasn’t cancer at all and Nick might get his senior season back. The first biopsy results had been sent to the Mayo Clinic for a second opinion to make sure surgery was the most viable option. However, the Mayo Clinic did not agree with the first diagnosis and thought it could be something else. So a second biopsy was done taking tissue from two different locations from the tumor and sent to the Mayo Clinic for testing. “That was actually the worst part,” his father Julian said. “It was good because there was hope, but there was some apprehension as well.” The test results would take up to 30 days to get back. I was real nervous…my anxiety was pretty bad too,” Nick said.  To cope “I started meditating every night to help calm myself.”

“His spirits they never changed, I never saw him hang his head.” said Coach Fisher.  “The only time I heard of tough moments for him was when his dad would tell me, ‘Today was a tough day for him’ … I could never tell and he was at every one of our practices even when the diagnosis was still cancer.”

On Day 53 the Cherry Creek Boy’s Basketball team wore Nick Strong shirts with his number on the front during warmups before their game with Overland.  Coach Fisher said, “Everyday, he was the same Nick as if he was playing…he just never wavered once. The world never saw any struggle from him. All we saw was a kid that was upbeat  and you almost forgot what he was going through because he was so strong.”

But, Day 73 would be a special one, and Nick would get what was left of his senior season back, and the possibility of playing at the next level was real again.

January 23, 2017, will be a day Nick and his parents, Julian and Nicole, will remember for a long while. Julian called Children’s Hospital wondering about the results of the latest biopsy sent to the Mayo Clinic. The nurse on the other end of the line said,  “Good thing you called. I got something sitting here, and I think it is good news.”  Julian asked if the nurse could tell him the results or if the doctor would have to call and give them the results. The nurse wouldn’t necessarily confirm the results, and the doctor would call him after surgery, but she said, “I can tell you now that results came back, and it doesn’t look like a cancerous tumor.”

“The first person I called was my wife, and the first thing she said was ‘Praise God,’” Julian stated. But the doctor still had to call back and give them the official news. Julian was growing nervous as the hours passed and the doctor still had not called. But finally late that evening the doctor called and confirmed the results. No cancer. It was Myositis Ossificans and treatment was much less invasive than that of Osteosarcoma.  “I broke down in tears and was speechless for 45 seconds on the phone, I was just speechless,” Julian recalled. “It was a sigh of relief, a big burden lifted.  I needed a moment to reflect and thank God for everything. I can’t describe the feeling, it’s a feeling that as a parent, that’s the feeling you want to have especially when your child was diagnosed with the disease that he had been diagnosed with and to get that news…it’s indescribable.”

Nick, however, didn’t find out about the new diagnosis of Myositis Ossificans until he had returned home after practice.  But Overland Head Coach Danny Fisher almost let the cat out of the bag. Julian had called Coach Fisher before practice to let him know there was good news but not to let Nick know as he and Nicole wanted to tell him in person. “I think Coach Danny knew. We was in film, and he asked me if I had talked to my dad earlier. He just seemed real happy and smiling; I didn’t know what he was talking about,” said Nick.  He found out soon enough when he got home that night.

According to the American Medical Society for Sports Medicine, “Myositis Ossificans is a condition stemming from an injury that can occur in many types of sports. In this condition, bone tissue forms within a muscle. When a bruise (contusion), repetitive trauma, or strain occurs to a muscle, myositis ossificans can develop.” What the new diagnosis meant was no cancer, and Nick would be able to play in his senior year.

With Nick back and the specter of a sick teammate gone, the Trailblazers finished the regular season winning six out of their last seven games losing only to the eventual 5A State Champion Eaglecrest. Overland finished 3rd in a tough league and got a first-round bye in the state playoffs. In the second around the Trailblazers lost to Montbello in a hard fought game.  “It was heartbreaking to lose, but I still feel like I was blessed because I wasn’t even supposed to be playing in that game,” Nick said of the season-ending loss.

Day 103, the high school season was over and Nick’s attention turned toward spring club basketball and finding the right situation to continue his playing career at the next level  which started with picking a club team. Nick decided to play with the Wyoming Power. “We got more than expected with Wyoming Power; Coach Tyler did a phenomenal job,” Julian said.  It was through work with the Wyoming Power that Nick got on Eastern Wyoming’s radar, and not long after the coach called and offered Nick a full ride scholarship.

There was a chance that Nick may go the prep school route, and he did visit a “prep school” in North Carolina which was so disorganized and for a lack of a better term shady, Nick decided to commit to Eastern Wyoming before he and his dad even got back to the hotel. Nick signed his Letter of Intent exactly 176 days since that horrible day in mid-November when it was feared his basketball career may have been over.  What a difference a 176 days can make. 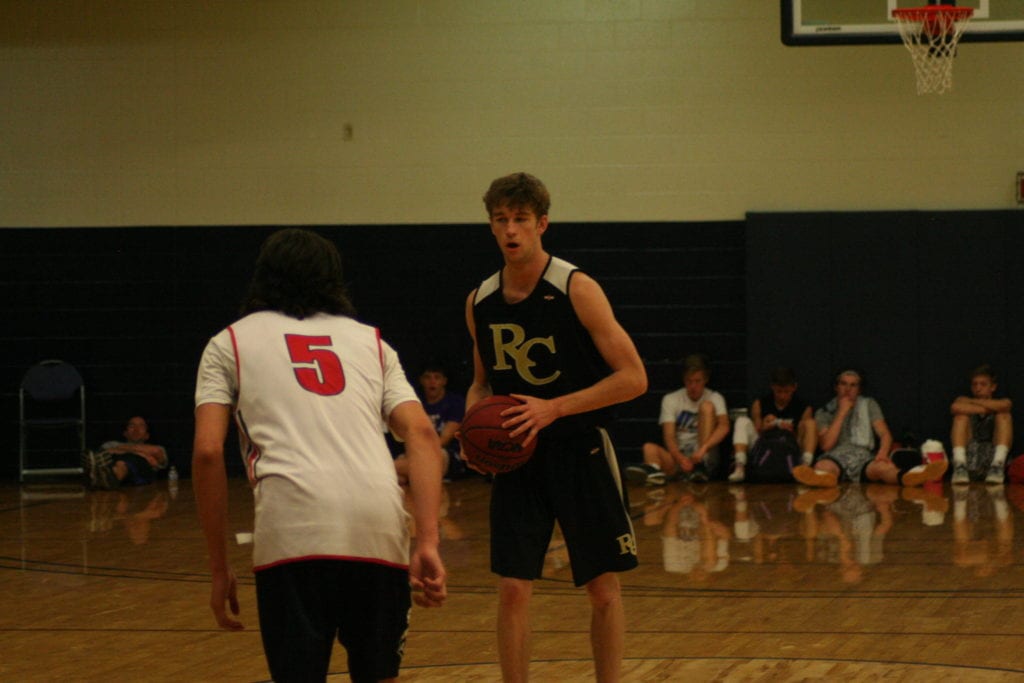