The Denver East Summer League is entering the second week of play with the top teams and players starting to separate themselves from the pack.
In the first game of the night at Manual High School,  Fairview with its highly touted new addition 6’7 PF Austin Sparks took on 6’6 SF Broderick Bernstine and Cherokee Trail. The game itself was sloppy with many turnovers and missed layups.  Which is usually the case in this particular league with former JV players getting acclimated to varsity basketball.
However, the 6’7 Sparks started off strong scoring off of solid post moves,  a couple of proficient mid range jumpers, showed he could shoot the three, and he even stole the ball intended for Bernstine at the three point line and turned into a dunk on the other end. Sparks ended the game with at least 17 points, 2 or 3 blocks and a few rebounds. Sparks, however struggled to guard Bernstine on the perimeter which was the turning point of the game.
Bernstine started off slow but heated up in the second half and turned this game around for Cherokee Trail. Bernstine was able to get by his defender attacking from the wing, distributing to his teammates and creating open looks for Trails three point shooters.  Bernstine finished with at least 10 points, 5 rebounds and 4 assists. Bernstine was able to score inside and out showing a couple of post moves and knocking down a three. 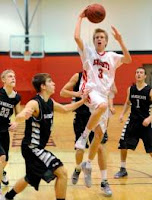 The guard play was not outstanding but Brent Wrapp of Fariview and Jay Nelson of Cherokee Trail stood out. Wrapp continues to show that he can get to the paint and distribute. He has shown with his club team that he is a more than capable shooter however that was not on display tonight. Jay Nelson  scored 10 points, knocking down two three pointers and was able to split the defense and get to the rim. Jay will need to handle the ball better as he projects to be a point guard at the next level.

In the second game of the night at East High School featured East’s Varsity vs. George Washington. East is simply loaded. 2013 Four star recruit Dominique Collier leads the talent parade for East however today he was on a visit to the University of North Carolina and was not at the game. 2013 Two star recruit (according to ESPN) Leonard Davis did not play as well as 2014 6’6 PF Tyre Robinson due to injuries. With all of this talent sitting out, it gave East a chance to play the rest. Starting with 2015 PG Brian Carey. Don’t let his size fool you, the 5’8 Carey is one of the State of Colorado’s top point guards regardless of class. His has better than average ball handling skills, sees the floor extremely well and his basketball IQ is off the charts. He can shoot off the dribble but his set shot is more reliable at the moment. He can also get to the lane, absorb the contact and finish. Carey ended the game with at least 15 points, 5 assists, and a number of steals.
2014 6’4 Ronnie Harrell might be Easts best kept secret. Harrell is a 6’4 shooter that is turning into a scorer. He is more than a proficient three point shooter and his ball handling skills are improving to make him a threat to drive from the wing. He finished with at least 10 points and provided plenty of excitement.
As if East needs any more power forwards there is 2013 Triston Terroade a 6’5 200lbs+ bruiser. Not super flashy but does the dirty work for the guards. He has soft hands and showed he can finish around the rim.

Then there is 2014 Jevon Griffin. A 6’2 combo guard that can handle the ball as well as put up alot of shots. He can get to the lane off the dribble but had a hard time finishing tonight. He finished with at least 11 points but not nearly the assists that Carey had as East easily defeated GW. 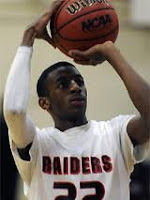 The last game of the night at East showcased Rangeview and  2014 CU recruit Jeremiah Paige going against Sierra High School out of Colorado Springs. Paige easily had 15 points. Knocking down three’s and driving with ease from the wing. The left handed Paige can dribble with either hand but prefers to finish with his left at the rim. 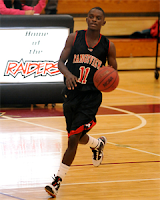 2013 Larry Bridges is another Rangeview guard that strongly attacks off the dribble from the wing and can finish once he gets into the lane.

2013 6’4 Tim Ealy is a more than serviceable “big” for Rangeview. Elay can use his body to rebound and can finish through contact around the rim.

Sierra will be rebuilding this year with a majority of the teams scoring and rebounding having graduated. It seems that the team will rely heavily on 2014 SG Sherron Wilson, but he is sitting out the DESL with an injury.