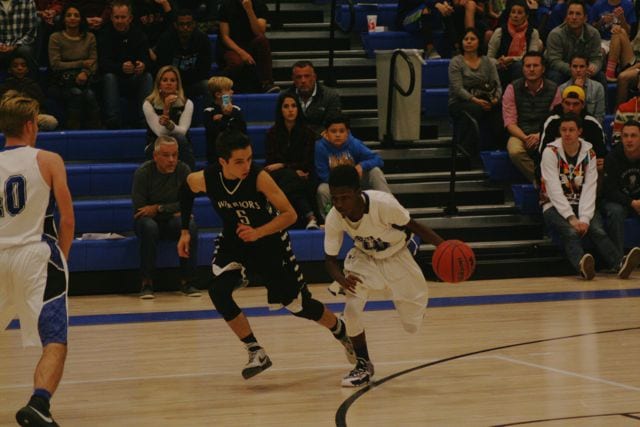 The Longmont Christian Warriors got their first real test of the year from the Crusaders of Denver Christian Tuesday night at Denver Christian High School. In what was a good small school contest of well coached teams, neither team gained a double digit lead through out the game. Both teams looked to attack the basket after getting the defensive rebound and neither team was bashful about putting up a three pointer.  However it came to,  as it has in many games we have covered this season down to free throws in the final minute for Longmont Christian to seal the game away 59-54.

Junior Luke Puchino and senior Antun Maricevic combined for 45 of the Warriors 59 points. Maricevic a 6’8 forward from Croatia also grabbed 20 rebounds in the game , using his body and jumping ability well.

The first half was dictated by Denver Christian. The Crusaders used a zone defense to contain  both Puchino and Maricevic. Maricevic normally had three people around him at all times while playing in the paint and then when he would step out he always had an hand in his face.  Puchino was forced out side of his range but when he wasn’t he either shot the open three or created contact to get to the foul line.  The Crusaders scoring the first half was done by junior guard Sergio Mukokomani. The sure handled guard got into the teeth of the Warrior defense and was able pass out for an easy 3 or finished with a lay up.  Even though the Crusaders controlled much of the first half the Warriors fought back to tie the game just before halftime.

The second half started and both teams struggled to get much going on the offensive end of the floor as the zone busting three pointers did not fall. Puchino did hit two three pointers for the Warriors. The Crusaders were led by junior Tyron Booysen who scored 7 of the crusaders 10 points in the quarter by getting to the basket hit a jumper and making a free throw.

The Fourth quarter started out with Longmont Christian build a five point lead.  But the Crusaders answered with a layup. With 3;51 left in the game Puchino  received a technical for his reaction to a call on a foul. Mukokomani drained all four foul shots and gave Denver Christian a 46-45 lead. Maricevic then continued to eb a game changing player scoring six point in the next minute to give Longmont Christian the lead back.  Watch how the game ended below.

Prep Hoops Spring Kickoff – Summary pt 2 In this summary we look at individual performances. There were a number...